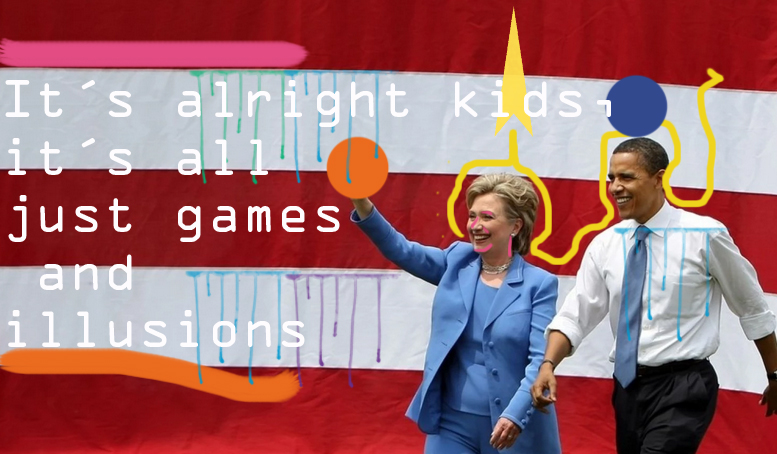 Well, first of all, my opinion is super duper semi irrelevant based on the fact that I couldn´t vote for Obama and won´t be able to vote for Hillary either, cauuuuse I am not a USA citizen,.. nor have I ever even been to the states.

Unfortunately for me and the rest of the world, what happens in the USA does have an impact (real or fake) on the places I am a citizen and can vote in. To be blunt, the way Denmark and perhaps the entire globe, follows USA´s elections, you would think we were all USA citizens. So don´t mind me, while I butt in with my little opinion  and go on a rant.

I am a bit (much) of a proud independent truth seeker (aka, conspiracist if you are into labels) so you might need to read this while pretending you never drank the kool-aid everyone seems to be sippin on 😛

First of all! USA, like many countries by now, is only pretending to be a country, while in reality it is a corporation owned by a very few people. The voting game/illusion is mostly a show they like to put on every now and then to make people believe that anyone can be president, and that presidents work for the interest of the masses. Weirdly though, over the past few years, the illusion bubble has been bursted a few times aiming to jerk people out of their deep sleep but somehow, we are all still gonna play along?

Like most people, I must say that I really really fell for the Obama trick. And yes, perhaps because I am black and African, so I felt a sorta way about the fella. Well played. However, the fact remained that it was just a new CEO in the same old corporation with the same old agenda: Keep the masses asleep and dumbed down and protect the corporation´s branches for the interests of the very important and self-proclaimed elite. The election is a selection of family members or a well connected network of friends. In a country of 300+ Million people, you will need to be totally gone to think that it is a coincidence that the only possible candidates all kinda know each other, are rich and are never your random average joe. ANYONE could be president? Stop sipping. I think when people get suspicious, they spice things up with a new face to the brand but the board of directors is ALWAYS the same so it doesn´t matter who is in front. It is just throwing the dogs a little bone but we all know who still pulls the shots.

Hillary Clinton, is not going to be any different for women, than Obama was for blacks or Bush was for white America or whatever demographic he was branded to. The fact that she is a woman is only because she might give an interesting hip new look to their brand and will keep the illusion going a little longer. You might say, “weellll, Obama did improve some things during his good eight years in Massa´s  White house”. Well yeah, but nothing more than to keep the slaves semi happy and give them a little ‘hope’. It is still the same game and the same routine. When money and total domination is the anthem and vision of the company, all notes will be tuned to stay on key and if not, they will be easily removed and replaced (Think JFK for example).

If you have been reading this post with your brows raised, I urge you greatly to do your own research and join the dark side. To be honest, once you give up the kool-aid, you won´t ever miss it. However, it will sometimes be like being the first one to wake up at a slumber party; suck’ish but only ‘ish’ I promise. And yes, my post might sound pessimistic but only because I believe in humanity and that if we know better; that there is nothing to fear but the illusion of fear (terrorism, ebola, overpopulation, armageddon etc.) then we could all wake up and actually aspire to REAL change! I know WE CAN!,.. I really do.